Midwives in the Netherlands work independently in the community in group practices, or in hospitals. Women refer themselves to a midwife for maternity care. Community midwives provide care in several ways: at health facility outpatient centres, in a birthing centre, in hospital, or at home (transferring to obstetrician-led care when necessary). Both community and hospital midwives assist women during normal births in facilities. Births with a midwife now account for over 75% of all women giving birth, and midwives are the sole caregiver in 57%. Despite a decreasing birth rate, the option to receive care by a midwife regardless of the setting has kept midwifery at the centre of health system development for maternal and newborn health. The MMR in the Netherlands dropped from 13 per 100,000 live births in 2000 to 5 in 2017.

Midwifery education is a directentry, 4-year BSc programme, which includes the midwife’s public health role, interprofessional collaboration, shared decisionmaking and expanded scope of practice, helping to position midwives as a strong, autonomous partner in care for women and newborns. An MSc was created in 2001 to bridge the gap between BSc and research opportunities for midwives, and in 2010 institutions created PhD programmes.

To address differences in access to care, “Healthy Pregnancy 4 All” and “Promising Start” were initiated in 2011 and 2018, providing support for specific challenges (e.g. debt, lack of social network, unsafe situations) that may confront women in vulnerable circumstances, including migrant women.

In 2006, KNOV developed a voluntary quality register that most midwives joined in addition to the existing government register which protects the title “midwife”. According to KNOV’s monitoring system, group antenatal care was implemented in three midwifery practices. By 2012, 143 midwifery practices offered this approach, with the aim of reducing over-medicalization.

In 2008, 75% of the 1,763 registered midwives worked as independent practitioners in community settings and 25% as hospital midwives. By 2012, an estimated 77% of hospital births under the responsibility of an obstetrician were attended by hospital midwives and 40% were solely managed by a midwife. By 2013, there were 23 homelike birth centres accessible to low-risk women supported by a community midwife. Of these centres, three were freestanding, 14 operated alongside an obstetric unit and six were integrated in an obstetric unit. 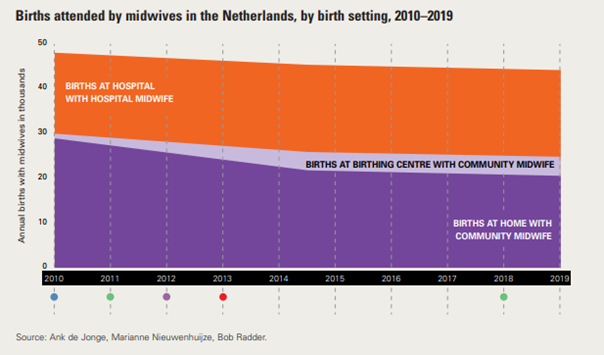 Registration as a midwife

After completing education, a Dutch midwife is obliged to register in a nationwide register for health professionals before she is allowed to work as a midwife. This so called BIG-register is open to the public. A midwife needs to renew her registration every five years. The most important requirement for on-going registration is a minimum of 2080 hours spent working as a midwife in five years’ time. The title midwife (verloskundige) is legally protected.

Working in the Netherlands

Midwives from abroad who are interested in practicing midwifery in the Netherlands must be able to communicate in Dutch (NT2, level 2). Their diplomas need to be assessed by the ministry of health, this procedure is free of charge. Depending on competencies and experience, it may be necessary to follow an additional course which gives an introduction into Dutch midwifery. The midwifery academy of choice offers the candidate a customized program.
If a midwife from abroad wants to work in the field of education, research, or management, it is not necessary to register with the ministry of health. Some midwives from abroad create their own employment as a doula or as a childbirth educator for expats.

The KNOV organizes a yearly Summer School to give midwives from abroad an introduction to the Dutch Midwifery system. More information about the upcoming Summer School 2022 will be published when available.